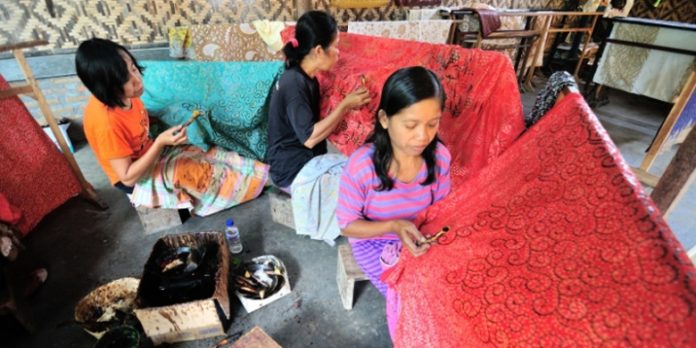 The Hand Drawn batik is the official attire of the Mataram Kingdom since its establishment. In Yogyakarta itself, there is a village that is a reference for obtaining the palace’s signature hand drawn batik, namely Giriloyo Village.

Giriloyo Village is located in the Imogiri Royal Cemetery area, precisely at the hill below the cemetery area of Mataram kings in Imogiri. Most of the male population is a servant in the palace of the Yogyakarta Palace, while the women are hand-drawn batik craftsmen.

The village, which is the largest center for hand drawn batik in Yogyakarta, consists of three hamlets. There are Giriloyo, Karang Kulon, and Cengkehan hamlets. Most of the batik craftsmen here already have the ability to make batik from hereditary. It is said that the art of hand drawn batik in Giriloyo has existed since the 17th century

Giriloyo Village offers several tour packages with a minimum of 5 and a maximum of 500 participants. In the tour package offered, everyone will be taught how to make batik by batik craftsmen who are local people and will get a souvenir in the form of batik on a small piece. Batik activities start from making patterns to making batik using canting. For the workshop, each participant is charged Rp 25,000 – Rp 50,000. Visitors can also buy hand-drawn batik at the hand-drawn batik gallery in Giriloyo Village with prices ranging from Rp 500,000 – Rp 2,000,000.

Towards Giriloyo Tourism Village, you can pass Imogiri Timur street to the south. Approximately 500 meters after crossing the Kembang Songo Bridge, there is a direction to the Tomb of Sunan Cirebon, turn to the east direction then follow the road until you meet a T-junction, take a right direction towards Giriloyo Village. After 200 meters there will be a large Joglo (traditional house of java) and a signboard for the Giriloyo hand drawn Batik Industry Center.

These are Interesting Photo Spots that are Instagrammable in Langlang Buana, Yogyakarta